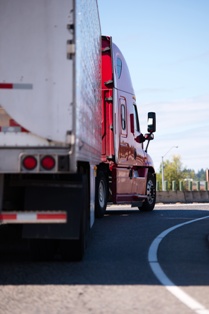 Due to the size and weight of commercial trucks, truck drivers have less room for making driving errors than drivers of passenger vehicles. The result of a poor decision can lead to a catastrophic accident that leaves occupants of the other vehicles suffering long-term injuries—and even death. One driving mistake that truckers make that can endanger you and your family is making an unsafe lane change. If a trucker caused your accident because of unsafe driving practices, he could be responsible for compensating you for your injuries.

Truck drivers—even more than passenger vehicle drivers—are expected to follow basic traffic laws and execute simple driving skills, such as braking, turning, and changing lanes. Even though they know better, truck drivers may cut corners in their driving in the rush to deliver their loads in time. As a result, many drivers make poor decisions or engage in other negligent practices that lead to unsafe lane change accidents. Here are some ways that a truck driver could be negligent in causing this type of wreck:

You may have a claim of negligence against both the truck driver and the trucking company who employs him. In Virginia, a trucking company is vicariously liable for its truck driver’s negligent actions if he was acting within the scope of his employment. You could also have a claim of negligent hiring if the trucker was not competent to drive a truck or had a violation of hours of service regulations if the driver was driving more hours than allowed under federal regulations.

Were you injured in an unsafe lane change accident? You need an experienced truck accident attorney to prove the truck driver and trucking company are responsible for compensating you for your injuries. Call our office to schedule your free, no-obligation consultation to learn about our extensive experience in these cases and how we can help you.